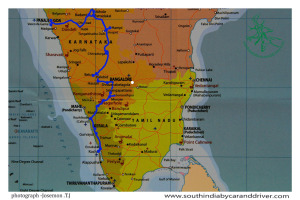 Pick up at the airport by your driver, travel 40 km to Kochi where you will be taken to your hotel situated within the historic Fort Kochi area. The rest of the day is free to relax at the hotel or to take a leisurely stroll. In the evening you will go on a sunset cruise. For this you will be driven to Kochi Harbour, where you can also check out the colourful activities of the harbour and the Chinese fishing nets. You might opt to take in the evening Kathakali dance show.

Kochi is Kerala’s most cosmopolitan city. It is also its main trading centre for spices and seafood. Built around a salt water lagoon of the Arabian Sea, Kochi is in fact a collection of narrow islands and peninsulas. While mainland Eranakulam boasts of concrete shopping malls and glitzy apartment buildings, Mattancherry and Fort Kochi have an old-world charm, with their blend of Dutch, Portuguese and English bungalows and quaint narrow streets. The scenic location of Kochi’s natural harbour, surrounded by palm groves, green fields, inland lakes and backwaters, has enchanted visitors from across the globe for centuries.

You might choose a stroll to take in the atmosphere, to shop or to visit, for example, Jew Town and its synagogue, the Dutch Palace, Saint Francis Church and the Dutch graveyard.

On the way to Wayanad the driver will show you some wonderful views and pass through attractive villages and propose interesting stops.

During a pleasant morning drive you will visit the famous Edakkal Caves. These are two natural caves at a remote location. They lie 1,200 metres above sea level, beside an ancient trade route connecting the high mountains of Mysore to the ports of the Malabar Coast. Inside the caves are pictorial writings believed to date to at least 6,000 BC, from the Neolithic man, indicating the presence of a prehistoric civilisation or settlement in this region. The Stone Age carvings of Edakkal are rare and are the only known examples in South India.

When arrive at your accommodation in Kabini you will be taken in charge by the wildlife experts for your 2 night stay.

The afternoon programme includes lunch, a 3 hour jeep safari with a guide to spot wild animals. Then relaxation before the evening meal followed by a wild life film.

The following day and the morning of your departure you will continue your programme which includes jeep and boat safaris into the Nagarhole National Park with the local guides. You will have breakfast, lunch and dinner, plus other surprises.

This is a wild jungle park with no enclosures. It is not a zoo and therefore it is impossible to plan the things that you will see on a safari. However most visitors observe elephants, monkeys, deer, boars, antelopes, bison, lizards, birds, butterflies, flowers, plants and trees. Lucky visitors might see a bear, a leopard or even a tiger. Do not forget your camera.

You will continue your programme of safaris into the Nagarhole National Park with the local guides. You will have breakfast, lunch and dinner, plus other surprises.

You will complete your morning programme in Kabini and leave for Wayanad and leave late morning for Mysore.

Your driver will take you on an evening car tour of the monuments of Mysore and a visit to the famous Devaraja fruit and vegetable market.

Situated among fertile fields, and skirted by wooded hills, Mysore was the capital of the Wadiyar Hindu dynasty that ruled southern Karnataka from 1399 to 1947, except for the 38 year rule of the muslim warlord Haider Ali and his son, Tipu Sultan, in the 18th century.

Modern Mysore is the creation of Tipu Sultan who, in 1793, levelled the old city and built the present town. Today, Mysore is an important cultural centre, with the largest university in Karnataka. It is also renowned for its ivory work, silk-weaving, sandalwood incense and carvings. Several elegant public buildings, erected under the Wodeyars, enhance the wide, tree-lined streets. In the heart of the city is the Amba Vilas Palace, built in 1902 to rival with the Taj Mahal to mark the coronation ceremony of Krishnaraja Wadiyar III.

The visits will include the Amba Vilas Palace, Chamundi Hill and the enormous crouching Nandi, Krishnaraja Circle, the Cathedral of Saint Philomena, Srirangapattana, the residence of Sultan Tippu, Lalitha Mahal Palace. Depending on the season and the weather, you might like to visit the close by Ranganthittu Bird Sanctuary.

Shravanabelagola is small town situated on its famous White Pond between two granite hills, Indragiri and Chandragiri. It is the most important Jain site in South India. It is dominated by a colossal 17.7m high monolithic statue of Gommateshvara, also known as Bahubali, son of the first Jain Tirthankara. On the summit of the very high Indragiri Hill, the statue of the naked saviour stands on an anthill, staring impassively ahead. Entwined around his legs and arms are creepers, indicating the length of time he stood immobile in meditation. An inscription at the base records its consecration in AD981 by Chamundaraya, the powerful minster of Rajamalla IV, one of the Ganga kings.

After the visit you will drive to Hussan.

The temples of Hoysala kings (12th-13th centuries) and their powerful ministers are among the wonders of South Indian art and architecture. They embody a fusion of the curving towers (shikharas) of North India with the columned mandapas of the South. They are characterised by their unique star-shaped plan and their rich surface decoration.

Belur’s Chennakeshva Temple boasts its shrine, pillars and sculptures. It was built in 1117 by King Vishnuvardhan to commemorate the Hoysala triumph over the Cholas. The entrance to the temple is through a towered gopura, erected by the king of Vijayanagar in the 16th century.

Halebidu is the home to some of the best and most impressive examples of Hoysala architecture. Hoysaleshvara Temple is a tourist’s dream with its superb sculptures and pillars. The building was started in 1121 by King Vishnuvardhana and lasted tens of years. Its structure comprises a pair of identical temples dedicated to Shiva.

The Kedareshwara Temple in Halebidu is a lesser known attraction but is worth a quick visit depending on time available.

Chitradurga gets its name from Chitrakaldurga (or picturesque castle), an umbrella-shaped lofty hill found here. Chitradurga Fort, dramatically positioned at the base of the rugged chain of hills, was built in stages between the 17th and 18th centuries by the dynastic rulers of the region, including the Rashtrakutas, Chalukras and Hoysalas as well as the Nayakas of Chitradurga, feudal lords in the Vijayanagar Empire. It became the headquarters of a line of local chiefs known as Bedas, until it was occupied by Haider Ali in 1799 and then by the British.

The fort was built as an impregnable fortification for defence purposes with gateways, posterior entrances, secret entrances, invisible passages, water tanks and watch towers. The edifice includes temples and various other structures.

After the visit you will drive to Hampi where you will stay for three nights in order to have two full days to visit its outstanding monuments.

A UNESCO World Heritage Site on the south bank of the Tungabhadra River, Hampi boasts the amazing ruins of Vijayanagar, the “City of Victory”. The capital of three generations of Hindu rulers for more than 200 years, Hampi reached its zenith under Krishnadeva Raya and Achyuta Raya. It continues to be an important religious centre. The site comprises the sacred and royal centres. It has a superb location, with rocky ridges and granite boulders acting as natural defences. The view is outstanding. The urban core of the city was fortified and separated from the sacred centre by an irrigated valley, through which ancient canals and waterways still run.

The grandest of all the religious monuments in the sacred centre, the Vitthala Temple represents the high point of Vijayanagar art and architecture. Though its founder remains unknown, it was enlarged in the 16th century by two of Vijayanagar’s greatest rulers, Krishnadeva Raya and Achyuta Raya. Preceding the main shrine is the great open hall, or mahamandapa, built on a low platform and supported by intricately carved pillars. This was the gift of a military commander in 1554, just 11 years before the city was sacked and abandoned.

Aihole is known for Chalukyan architecture, with about 125 stone temples dating from 5th century. The largest and finest, the Durga temple is also the most unusual because of its apsidal sanctuary surrounded by an open colonnade. The temple is elevated on a lofty plinth, with steps at one end leading to a porch with elaborate carving of sensuous couples and guardians on its columns. Other sculptural masterpieces, of Shiva with Nandi, Narasimha, Vishnu with Garuda, Durga and Harihara, are placed in the niches lining the colonnade. The interior of the hall is plain by contrast and the circular plinth within the sanctuary. The temple’s name is a misnomer, as the identity of the image that was once worshipped here remains unknown.

Pattadakal is a UNESCO World Heritage site. Its sacred complex is picturesquely situated on the banks of the Malprabha river. The superb 8th century temples are a fitting climax to the artistic achievements of the Chalukya Kings. The town displays both Dravidian and the Nagara styles of temple architecture.

After the visit you will drive on to Badami.

In Badami you will visit will include the impressive Cave Temples. Badami was the regal capital of the powerful Chalukyas kings who ruled the Deccan during the 6th-7th centuries. Dramatically situated within a horseshoe of red sandstone cliffs, overlooking the calm green waters of the large Agastya lake, this historic town is famous for its rock-cut and structural monuments. The richly decorated Cave Temples are carved into the cliff and are dedicated in turn to Shiva, Vishnu and to the Jain Saints.

After the visit you will drive to Goa.

Goa is a tiny state, along the Konkan Coast, covering less than 4 sq. km. Goa’s distinct culture is a legacy of its colonial past. In 1510, Alfonso de Albuquerque established a small but powerful Portuguese enclave here. Goa become a part of the Indian Union in 1961, but evidence of centuries of Portuguese rule is still apparent in the people’s dress, language, religion and cuisine. Also in their music, a fusion of the plaintive fado with the lilting rhythms of local Konkani folk songs. Goa is known for its idyllic beaches, lush paddy fields, coconut plantations and grand mansions. Other attractions include the Hindu temples and magnificent cathedrals. The friendly, easy-going people of Goa go out of their way to make visitors feel at home.

You can choose your programme to include one or several of the following : the beach, a river cruise, Reis Magos with its fort and church, the Anjuna Beach flea market (Wednesdays only), the Bom Jesus Basilica, some of the other magnificent religious edifices.

We recommend that you include the Bom Jesus Basilica, a UNESCO World Heritage Site, which is considered to be one of the best examples of baroque architecture in India. It is revered by Roman Catholics all over the world as it houses the mortal remains of Goa’s patron saint, Francis Xavier.

The activities for this day will depend on the time available before your flight. Most of our guests choose to relax at the hotel.

You will be driven to Goa International Airport in time for your return flight.